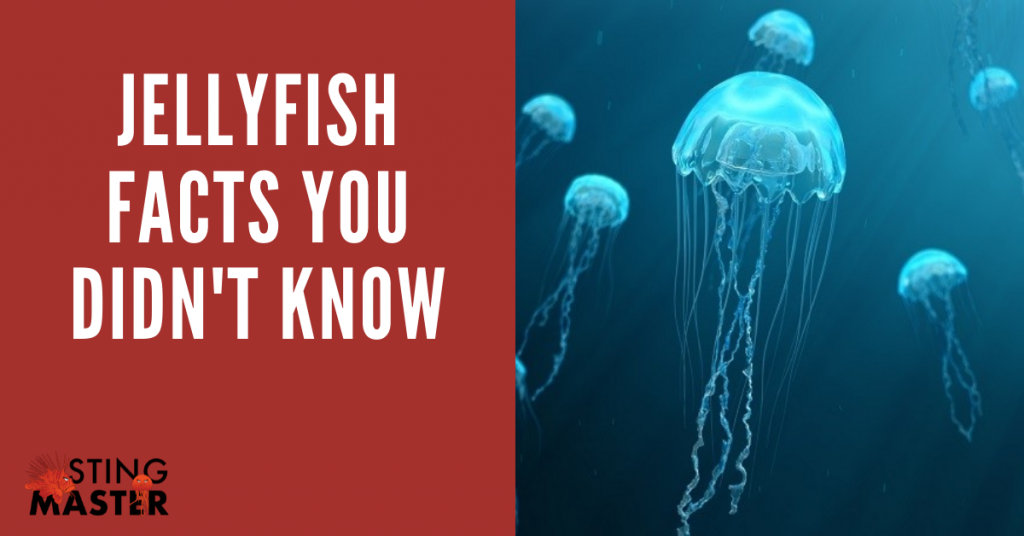 Think you know everything there is to know about jellyfish? Guess again - we have compiled a list of 12 different jellyfish facts that we bet you’ve never heard before.

Jellyfish myths – everything there is to know

Their body is composed of a smooth, sack-like body, and with their tentacles dangling out covered in tiny stinging cells called nematocysts.

Jellyfish can use their mouth to help them move.

They can squirt out a jet of water to propel themselves forward.

Only 5% of their bodies are composed of proteins and non-water components. Humans, by comparison, are only composed of 60% water.

A group of jellyfish can go by three different names: a bloom, a smack or a swarm.

Peeing on a jellyfish sting won’t relieve its pain.

The best solution is to use StingMaster

They are actually invertebrates. Fish breathe through gills, whereas jellyfish absorb oxygen from water through their membranes.

There are over 25 types of edible jellyfish.

They can be found in salads or even pickled and people say they have a salty taste with a similar consistency to rice noodles.

One type of jellyfish is thought to be immortal

It’s cally Turritopsis dohmii, and it’s considered immortal because it can transform back into a colony of polyps that are genetically identical.

Jellyfish can be found in all ocean waters across the planet.

Due to the fact that jellyfish have no bones, fossils of ancient jellyfish are almost impossible to find. A preserved jellyfish fossil was found in Utah in 2007 that was dated to be over 505 million years old, pre-dating dinosaurs by at least 250 million years (dinosaurs were around 245 million to 66 million years ago).

Some jellyfish are bioluminescent.

The scientists that isolated a bioluminescent protein from jellyfish and turned it into a biology tool, called GFP, won the Nobel Prize for Chemistry in 2008 (their names are Martin Chalfie, Roger Tsien and Osamu Shimomura).

At StingMaster, we know stings. We have developed StingMaster, a cream that provides instant relief for jellyfish, lionfish, sea lice and fire coral stings. StingMaster is the fastest and most efficient solution for jellyfish stings on the market, and will have you back to having fun as soon as you can apply the cream to your stung area. Buy StingMaster now on our website, and learn more about how it works. You can also read answers to our frequently asked questions, read product reviews and